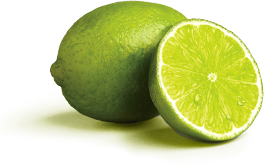 Limes are one of the smallest members of the citrus family. Our Persian limes are available all year round. Lime trees bloom year-round. Their peak bloom varies by region. Limes are a great source of vitamin C and possess a tangy flavor.

Historically limes were used by sailors against scurvy. Limes are a popular citrus staple in a variety of cultural cuisines such as Mexican, Southwestern, Thai, Vietnamese and Middle Eastern. Limes are also an important part of the beverage business and have become a mixologist’s staple ingredient. There are a few different varieties of limes such as Persian (also known as Tahiti or Bearss), Kaffir, and the smaller seeded variety known as the Mexican, West Indian and Key limes.