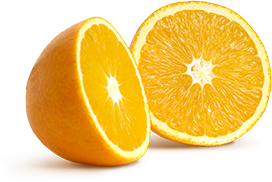 For ultimate refreshment, try Valencias. Generally a summertime fruit, Valencias are heavy with juice and have a sweet, delicate texture. Known as the ultimate juice orange, a Valencia’s flavor is a perfect balance of sweet and tart.