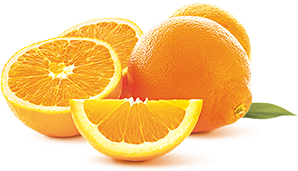 Nicknamed “The Honeybell” because of its bell shape, the Minneola tangelo is a cross between a tangerine and a grapefruit. Its large size and slightly elongated “neck” make it easy to recognize. The most popular of the tangelos, seedless Minneolas are brimming with sweetly tart juice.